Our Future here in Delaware County 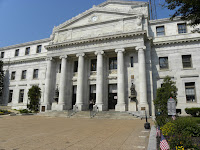 This is what's on my mind at this late hour. this is my opinion of what's going on here in the United States as well as the rest of the world. The Democrats, with the aid of the MSM, Social Media, the backing of George Soros, The Vatican, and the Communist Government of China, have been mounting a multi-faceted assault on President Trump and the Republic of the United States of America. This amounts to Seditious Treason, espionage and several other "Crimes against the State". Our children are being indoctrinated into Marxist ideals in school, violence is glorified, sexual perversion is rampant. Make no mistake. This shit is REAL.

And the Republicans are guilty of this as well, but in a different way and a different time. I was dead set against George Bush and his "Terror" campaign naming Saddam Hussein as the bad guy behind 9/11. Within 24 hours of that horrible day, where I watched three buildings imploded right on television, He was begging for war with Iraq. This had NOTHING to do with Saddam or Kuwait. It had everything to do with Him deciding to trade oil not with American Dollars, but with Iraqi Dinar.

That was his fateful decision that costed 600,000 Iraqi citizens of all ages death, and over 1,200 American Service personnel thier lives.

And over the years, Gulf "Two", and Afghanistan have cost us dearly.

President Trump is the FIRST "outsider" that I know of that wouldn't play their game. "Both" sides have been trying to oust him, unsuccessfully.

This November, WE The People need to VOTE TRUMP. Or seal our fate as slaves to the Democrats who want the U.S. to go back to "The Way it Was". Like having our companies outsource to China, and sell out America for their cronies.

Lastly? This "Wuhan" Virus? It was manufactured with the blessing and help in my opinion by Dr. Anthony Fauci, Funding by Bill Gates and George Soros, and the blessing of the MSM, Social Media, Silicon Valley, and the Democratic higher ups.

And locally? We have the inept "Novel" Mayor, Barbarann Keffer, who clearly cannot handle this community and it's problems. More about Her later...

Here's a quick post of some new Social Networking platforms that I am using to have my political views seen. I also have this Blog, although it's like a dinosaur, but believe it or not, gets attention from certain local "Political Groups" enough to complain to google. It's called the 1st Amendment. You know, the one that you want to take away from republicans or any conservatives people?
Here are the un biased platforms.
https://parler.com
https://www.podomatic.com
https://orbys.net
Look for "Franny Ward" on them and friend request me.
Posted by Franny Ward No comments:

Welcome to 2020 in Delaware County 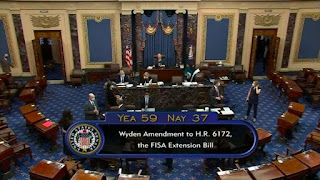 There ya go. one thing that irks the shit out of me is Republicans always wanting to spy on every aspect of your life in the name of "FREEDOM". Starting with George Bush's "Patriot Act", one that basically stripped the rights of Americans to overthrow a tyrannical out of control government, all in the name of "Protecting our Freedoms" fro those nasty box cutter carrying Arabs. He USED 9/11 and the trauma we all went through to ram that 900 plus page of shit down our throats.
A lot of you are wondering, Why worry? I have nothing to hide? That's the point. It's none of their BUSINESS what I browse at. PERIOD. And given the inept FBI's track record on spying on President Trump while He was campaigning, at the bequest of the Obama administration, anything is now possible. We have all become sheep. Democrat, Republican, Independent. Kiss your "Rights" goodbye.
Look what they did to that United States Army Lieutenant General who was briefly the National Security Advisor to President Donald Trump. imagine what you or I would be? Chump Change. That's what. No, too much power. Too much surveillance. Too much of everything that flies in the face of a once Democratic Republic.
And this Covid bullshit? Six feet? Why not twelve? these masks? Bandannas? They do ZERO to protect you or anyone else. It's a farce. Every day and night I hear on the police scanner call after call for "People congregating without masks", or Kids playing football in an alley without masks. Turns out they were all brothers, living in the SAME HOUSE. Do you think the police like getting these calls?
Here's the final nail. if "they" find you a "nuisance", what's to say they don't plant some illegal shit on your PC or phone? Or start "gaslighting" you? The ONLY thing is keeping them from Total control is the Second amendment. and THAT'S where the Democrats are hard at work, trying to dismantle or abolish it completely. I've seen this coming, from the Chemtrail, Sandy Hook, Boston Bombing, Oklahoma City bombing, 9/11, Vegas, Kirkland, Waco, and now Covid-19. ALL "Conspiracy Theories" mind you. In essence, they ALL happened as you were told they were, by the MSM and government. Feel that they weren't? Go put it out there on You Tube. It will last about as long as the day does.
It's funny. Real life has a strange parallel to Hollywood, and all the movies that have come out over the last 50 years. So just sit back, make some pop corn, and turn on Netflix or Amazon Prime Video. Enjoy your Saturday Night.
Cheers 😎
Posted by Franny Ward No comments:

Bill Gates, No more Public gathering until EVERYONE Gets the Vaccines


Another pompous Democrat, this one mocking her Republican opponent. discusting and vile. No respect at all.

It's been awhile since I posted anything "political" here, but this is a reminder to ALL Delconians of just what the Delaware County Democratic Party is all about. If you do not agree with them, especially if your a Republican or Conservative or even have no real political affiliation, they WILL censor you on their Facebook Page and God knows what else. A little backstory on this that leads me to believe why they blocked me. I was informed by Google last October, before the November elections, that someone put in a "complaint" about this blog, that it was biased towards Democrats.

Google just let me know through my blogger interface, where I have a few blogs dating back to 2002. I dug a little deeper and found that it was a specific page that since been mysteriously deleted.

Fast forward until yesterday. I'm having my usual dose of the Coronavirus pandemic, how some feel that it's fake, overblown, our freedom is gone, etc, etc. So it led me to the "Official" Facebook Page of the Delaware County Democratic Party, called the Delco Dems. It's was created in July of 2009.

I was logged in on facebook under my "Franny Ward" account, one that I've had since 2007 when I clicked on the link to read through and then reply to a few posts. Here I am BLOCKED from replying or posting anything on any post. Ok I thought. I'm not a member or anything, then I realize it's a Page, not a Group. There is no "Membership" required.

Funny thing is? I never posted anything there ever. So just WHO's feather's did i rattle? guess I will have to go through every post on this blog and try to connect the dots. 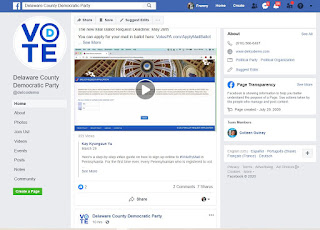 Here is a screenshot from my Franny Ward account. 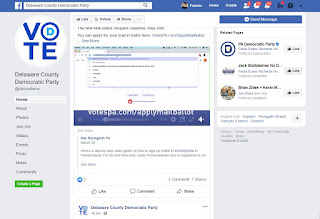 For them to block me like this just reinforces my distrust of local Democrats in general. and we won't even get into the George Soro's "Affair" with them here locally, one where they magically swept Delco up in their "Blue wave". One where they took County Council, The DA's office, and a shitload of local representatives from the Republicans.

It seems that here in Delaware County, since the Democrats took over, there is little news of what's being done locally. We have to get our information from the MSM. I do not believe their skewed and biased reporting.

I know that people are going batty being cooped up in their homes. Small Businesses are closed and teetering on Bankruptcy. and on Facebook and Twitter? nothing but Political bullshit being spewed out on both sides, instead of rallying together.

Email ThisBlogThis!Share to TwitterShare to FacebookShare to Pinterest
Labels: Covid19

Hello. If you are a client or former client of ours and were satisfied with our work please take the time to give us a 5 Star review as it helps our local
Delaware County Business.
Thank You.